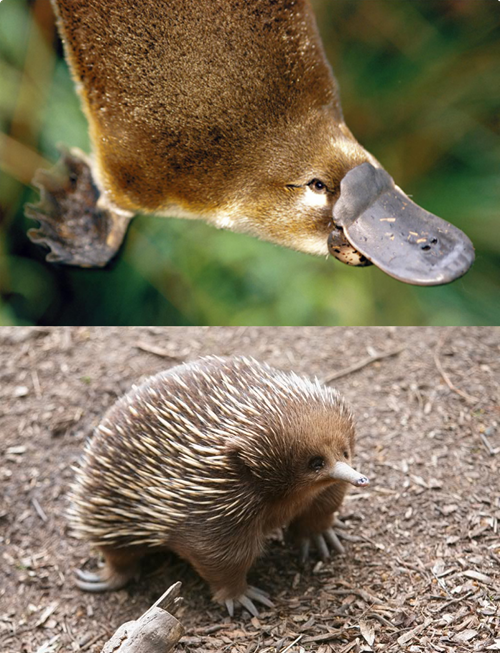 They aren’t reptiles, but they lay eggs. They aren’t amphibians, but some do take to the water. They aren’t birds, but they have webbed feet. They also produce milk and rear their young. Is this a case of an identity crisis or are we dealing with an oddball from the animal kingdom?

If you had to differentiate a mammal from its Animalia cousins, you would look for two specific characteristics:

Any animal that doesn’t check these two boxes is automatically disqualified from the mammalian classification. For the large part, this would be a good test to administer. But not when the animals under consideration are Monotremes.

Say hello to the non-conformists

The platypus resembles a cross between a beaver and a duck. They have beak-like snouts which are actually sensory tools that contain electroreceptors. These receptors allow the platypus to sense the electrical pulses generated by other animals as a result of muscle contraction. The platypus uses these electrical pulses to find and feed on small fish and invertebrates.

Currently, there is one species of platypus in the world.

Platypus spurs are connected to a venom sack found on their hind legs, near the ankle. The venom is a combination of b-defensins proteins which are designed to destroy viral and bacterial pathogens. While the toxin isn’t fatal to humans, it will cause excruciating pain when injected.

Scientists have observed that platypus use the venom only during the mating season when battling other males for females. During the non-mating season, the platypus’s body does not produce the poison and remains dry.

The four species of echidna are land-based animals and they resemble the porcupine, given their spines. The short-beaked echidna is an ant-eater, feeding exclusively on anthills and termite mounds. Its long-beaked cousins also feed on earthworms and bugs, in addition to ants and termites. They use their electroreceptors-filled snouts to find food.

Both the monotremes have a short build and large shoulder muscles which give them the physical force to dig into the ground. They are also ‘cold’ blooded, having a body temperature of 32C, which is 5C lower than other mammals.

The echidna’s spurs are non-poisonous and completely harmless; it may sometimes be used for defensive purposes.

3 facts we know about monotremes

Not much is known about these mysterious animals, but here are a few facts that we do know:

Like birds, monotremes have webbed feet, possess beak-shaped snouts and have no teeth. Like amphibians, the duck-billed platypus is an excellent swimmer, staying close to water bodies and spending most of its life in cool rivers and lakes. Additionally, like reptiles, they have a cloaca (a single opening that is used as the digestive, reproductive, and urinary tract) and they lay eggs. But this doesn’t make them solely non-mammalian.

The spiny anteater (echidna) and the duck-billed platypus possess certain physiological characteristics, like – the single bone in the lower jaw, the three small bones in the inner ear, hair on the body, high rate of metabolism and the ability to produce milk – all of which are endemic to mammals.

The duck-billed platypus resembles reptiles and amphibians in its reproductory characteristics. Females lay 1-2 eggs at a time and burrow 20-30 meters below the ground to lay their eggs. The eggs hatch within 10 days of laying.

The echidna, on the other hand, resembles marsupials. They lay up to 3-5 eggs per batch and they store these eggs in a pouch that grows on their bodies. The eggs are gestated in the pouches and they hatch between 10 and 14 days.

When born, the newborns resemble fetuses (as seen in placental mammals). This short gestation period, coupled with the young’s need to physically develop outside the womb, is what is called a premature birth.

At this point, both monotreme species rear their young like birthing mammals. They produce thick, vitamin-filled milk out of their sweat glands that the young can suckle on.

This video of a monotreme birth is a rare insight into the reproductory behaviors of these little-known creatures:

Research shows that about 200 million years ago monotremes split from the line of traditional mammals and evolved physiological traits that differentiate them from placental mammals. Some scientists believe this could be an evolutionary reaction to competition to resources like food, land and mates.

Marsupials made their way to Australia 71 to 54 million years ago, creating stiff competition for the monotremes. By evolving different characteristics – like the ability to swim and lay eggs – monotremes were able to find new places to occupy and new ways to continue their bloodline.

The first ever monotremes were platypus-like animals. But over a period of 15-25 million years, a change was noticeable, with the body of certain species of platypus becoming more like that of the echidna. Scientists can only speculate that this was again an evolutionary requirement, to help monotremes adapt to the various geographical and environmental conditions of the new lands they were occupying.

As of today, the duck-billed platypus and the echidna have remained physiologically the same as they first were when evolved. Little is known about why they remain in this stunted evolutionary form. But, with new monotreme fossils being discovered, there is hope that the veil shrouding these mysterious creatures may finally be removed.